How to use Mr. or Mrs. in a LinkedIn automated message? 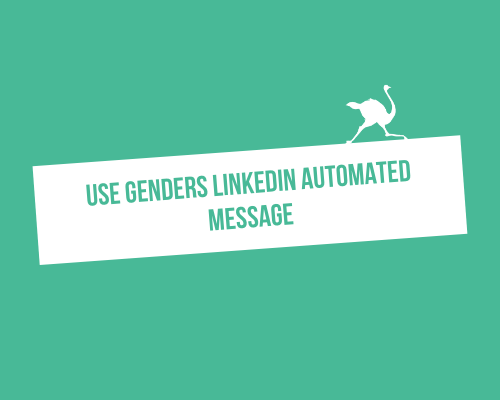 This is a question that often comes up with our users. How do I use Mr. or Mrs. in an LinkedIn automated message? Or rather, how do I know if my prospect is male or female on LinkedIn?

Only inserting a last name seems very automated (a little strange too, let’s be honest), while only using the prospect’s first name comes across a little too familiar on what is still a  professional network.

But I am going to present to you two possibilities. Both are more or less practical and effective. 👌🏻

Why is there no tool that allows you to personalize a LinkedIn automated message by Mr. or Mrs.?

Think back to when you created your LinkedIn account. I know that was probably a while back for some. But essentially, you were never asked if you were a man or a woman. LinkedIn does not request this data from its users.

As a result of this, this information is not available on user’s profiles.

LinkedIn-based automation tools retrieve profile data from user’s profiles. So if LinkedIn doesn’t have the info, neither do we!

But the question still still remains: how to use titles related to gender when sending an automated message on LinkedIn? 😅

The manual solution to recover gender on LinkedIn

This is the cheapest and most efficient solution. On the other hand, it requires some manual actions, but executed well it is quite fast.

You will export a list of prospects from a search directly in ProspectIn.

Once on the list, you have to scroll through the profiles and assign each prospect a tag, based on the photo and their name. If the photos do not appear in your list, go to the settings page and activate the option.

Let’s say that you first seek to categorize all female prospects.

Simple, efficient but requires several manual operations. Fortunately (or not, there is an automated solution). 🙃

The automatic solution to retrieve gender on LinkedIn

Gender-api.com is a website that allows you to know the probability a person is a man or a woman, based on their first name.

The method I am presenting to you here is quite time-consuming and therefore might only be of interest if you have several hundred prospects.

Gender-API offers you 500 gender searches per month. It’s a good way to process your leads at a lower cost. 👌🏻

Go directly to their site and create an account.

2. Export the profiles in CSV

Go to the ProspectIn campaign you want to process.

As the gender associated with a first name can vary from one country to another, I also suggest that you separate your campaigns by prospecting country (if you are prospecting in different countries).

Indeed, LinkedIn does not always give the country in the “Region” information. Sometimes there is only the city and it will be hard for Gender-API to distinguish.

You will receive the file in your mailbox within a few minutes.

Open the file in UTF-8 format by following this GIF-tutorial.

You get a file with the first names correctly formatted and loooots of other data. 🤪

In this case, we are interested in the first names and the LinkedIn URLs.

If you followed my previous advice of organizing campaigns by prospecting country, your exported campaign will that only contain one country. We are going to add a “Country” column that we will label with the country in question.

Now save the file as an “Excel workbook” (Gender-API does not accept CSV formats …).

4. Import the file into Gender-API

Drag & drop your file or fetch it by browsing your documents.

Gender-API gives you results on a sample of 10 profiles to check that it looks consistent. So you have the gender and the estimated likelihood for each profile.

If you’re happy with the sample, go ahead and confirm to get the file fully converted. 🤝

It takes a few seconds to process. You can then recover the file with the following columns added:

5. Split the CSV file in half

In order to do the separation in our ProspectIn campaigns (since only LinkedIn URLs will be taken into account), we need to separate our file into Men and Women to import it twice.

First, sort your file according to the “ga_gender” column. This gives you first all the women and then all the men.

Cut all the “female” profiles and add them to a new sheet.

Save as a CSV file.

6. Delete the previous profiles and import your new database

Delete all the profiles that you exported at the start in ProspectIn. This is necessary as ProspectIn has an “anti-duplicate” security which will prevent you from importing them again. It may take 2-3 minutes depending on the size of your campaign.

Then you have two options:

If you choose the “tag” option:

Tagging male profiles is not mandatory, you can operate by exclusion but this technique will allow you to repeat the operation with other profiles later.

That’s it! All you have to do is distinguish your approaches by gender, Mr. or Mrs.

Nothing could be simpler: copy and paste your messages, then specify the gender. For example:

It is possible that Gender-API is not able to determine the gender for unique first names, or that the calculated probability is low for first names which are gender neutral (“Andrea” for example).

In this case, it’s up to you to decide whether to:

“Hello Sir or Madam. I am contacting you today without being able to specify your gender, because the originality of your first name did not allow my software to automatically define whether you were a man or a woman.

But hey, some would argue that assuming people’s gender is not very 2020. Looking forward to hearing your thoughts on this” 😄

As you can see, neither of these two methods is perfect. While the first is “safer” and applies well to small volumes, the second will be more suitable for you if you need to process several hundred prospects. 😉

The Gender-API tool is fairly inexpensive (€8 per month for 5k first names) so this approach could be a great option, albeit somewhat tedious.

To sum up in 4 questions

Is it possible to use Mr and Mrs in a LinkedIn automated message?

How much does Gender-API cost?

Gender-API offers you 500 credits per month, which may be enough to allow you to have a play around with the tool. Once that’s spent, you will  have to go for the basic subscription at €7.99/month, if your goal is to add a genre in all your campaigns.

Are there other tools than Gender-API?

Absolutely, but I haven’t tested them. Gender-API offers fairly reliable results for a very affordable price and intuitive handling. But I admit that I haven’t looked at the competition, so don’t hesitate to use another tool if you find a better one!

Why doesn’t ProspectIn give me the “Male” or “Female” information?

That being said, we are planning direct integration with tools like Gender-API on our next version, scheduled for 2021. How to transfer your campaigns from ProspectIn to Waalaxy?

11 min Many of you are asking this question. And rightfully so. 😜 How do you transfer your campaigns from ProspectIn to Waalaxy? How do you keep track of your leads’ history? What is LinkedIn? Read more… 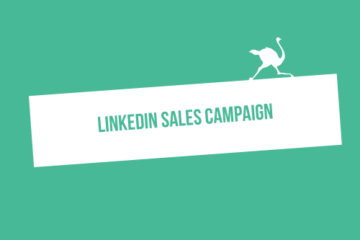 9 min In this article, we will see how you can boost your B2b sales campaign on LinkedIn. And this, thanks to 8 key points very simple to set up with ProspectIn! How LinkedIn makes Read more… 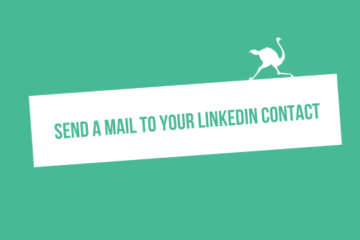 Send an email when a contact accepts your LinkedIn connection request

9 min Welcome to our all-in-one tutorial, dedicated to ProspectIn’s new feature, Triggers! In February, Guillaume introduced you to the Triggers feature: What is the Trigger feature? To learn the basics of this feature I Read more…